The creatures that lurk in the stream.... 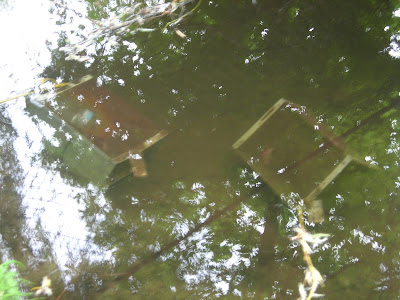 As a part of the stream restoration event held in our yard last week, the guys from Adopt-A-Stream put a few live traps in the stream overnight to get a feel for what is or is not living in this section of Little Swamp Creek. The traps were baited with punctured cans of cat food. I know that is a BAD picture, but I just had to put it on here anyway. Here's what those traps looked like out of the water - 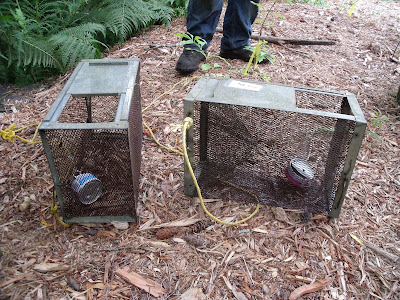 This is a second style of trap that they used, and what it caught - 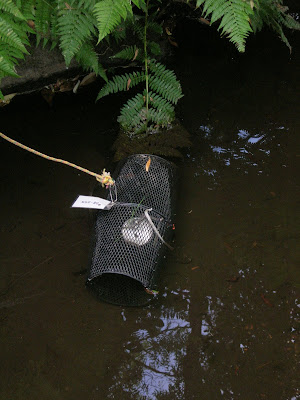 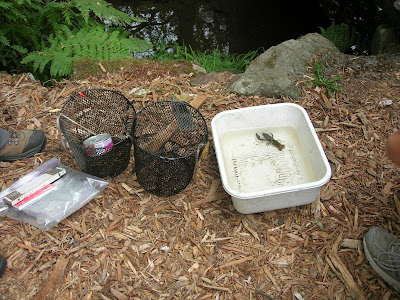 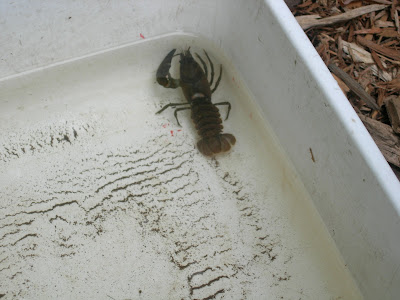 We had not seen any crayfish or any evidence of crayfish (parts left behind by raccoons, for example...) in the stream for several years, so we were pretty excited to see that they are still living in there.
Then we saw this from another trap - 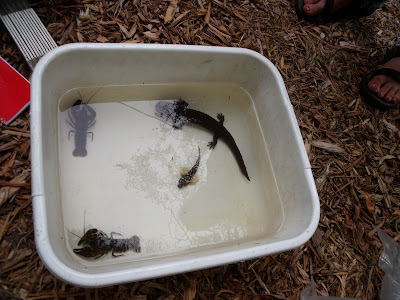 Woo hoo! That is two crayfish, a sculpin and a Pacific giant salamander! What you have to realize is that all we see when looking in the stream during the day are some small (2-4") fish (probably cutthroat trout or coho fry) zipping around, caddisfly larvae crawling along the stream bottom, and water skeeters on top of the water. Those are great, but this was an amazing discovery and so encouraging as indicators of a relatively healthy stream!
Here's a SECOND salamander, from a different trap - 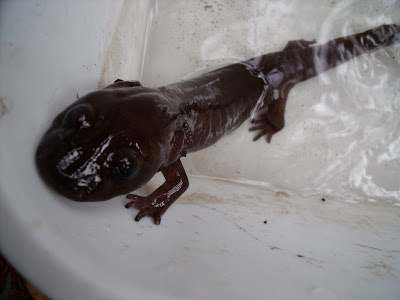 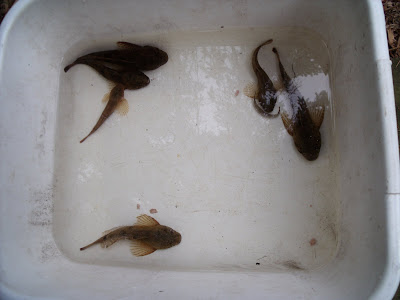 I probably must emphasize here that Adopt-A-Stream had a permit to trap and release in the stream. They didn't keep these creatures out for very long, but it was just the perfect thing for Eric and I and the students from The LEAF School to see what inhabits the stream.
Interestingly enough, there weren't any of the little fry that we see zipping around in the stream. Unfortunately they are food for these other creatures and if any were trapped they may have been eaten. Oops.
Later in the day, CK and Loren from Adopt-A-Stream collected macro-invertebrates from the stream bed so the LEAF School students could figure out what was there. I'll talk more about all of the amazing learning opportunities AAS set up in a later post, but for now here is a picture of some of what they found - 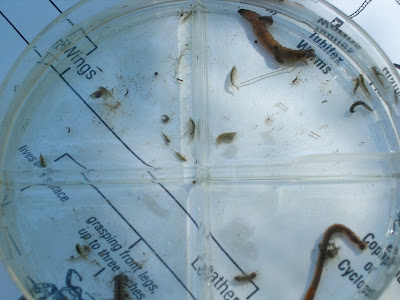 And finally, here is a critter that just happened to show up at the right place at the right time for some ooo-ing and ah-ing and a picture - 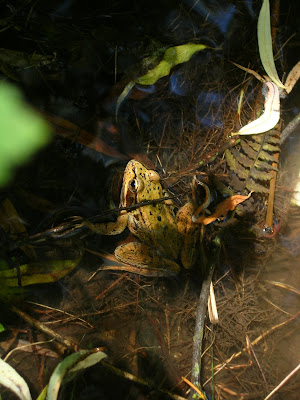 I'm afraid that it might be a young bullfrog, which I don't think is a good thing for the native amphibians. I haven't been able to identify it yet, so if anybody out there reading this can tell me what this is, please do!
Posted by Stream keeper at 6:26 PM 2 comments:

Email ThisBlogThis!Share to TwitterShare to FacebookShare to Pinterest
Links to this post
Labels: Adopt-A-Stream Foundation, insects, The LEAF School, wildlife

July 22nd was the day that Adopt-A-Stream (AAS) and a new class from The LEAF School at Edmonds Community College came to install "large woody debris" (LWD) in one side of the stream bank in our yard. Once again we want to send out a HUGE thank you to everyone involved in this project! You are all amazing and do such good work.
I must admit that I had no idea how or exactly where this large woody debris was going to be installed, so it was very fun to watch and photograph. Happily, I am finally putting this post together to share the process. 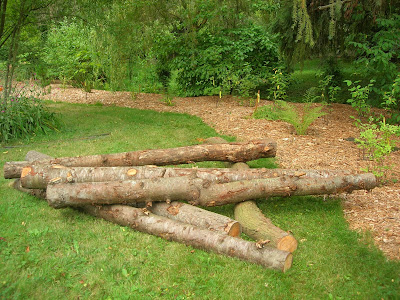 That is the pile of logs that Adopt-A-Stream dropped off the day before the big event, along with a small pile of rebar. The mystery was growing. The Adopt-A-Stream elves also placed some live traps at a few spots in the stream to see what would wander in over night. I'll talk about that more in a different post...
As I discovered and you will see, the plan was to place two criss-crossed logs at three different places along the west side of the stream bank in our yard. The guys from Adopt-A-Stream placed the logs in the right places and drilled them, and the students from The LEAF School pounded in the rebar to keep them in place. Here is my record of the event ---
The first set of logs were placed just right and holes were drilled into them near each end and where they cross - 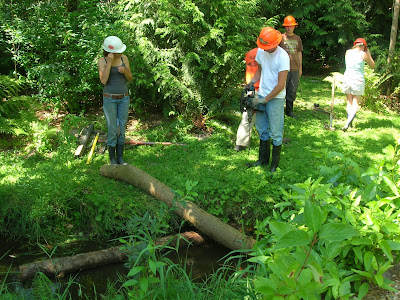 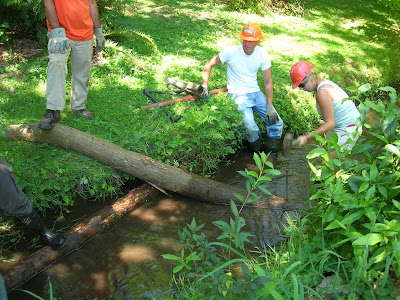 Here the first set is, all done - 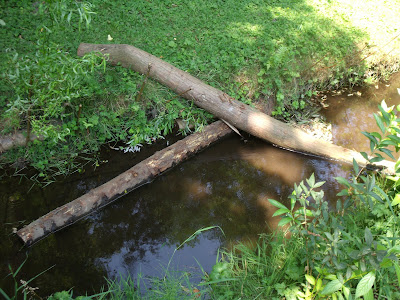 That part of the stream bank experienced a lot of undercutting/eroding in the last year or so. The AAS guys shoved some lengths of thick willow branches (left over from a tree that fell over in our yard last winter) into the bank to help stabilize it. Plus they came back the next day with "live stakes" of redtwig dogwood and willow branches to shove into the bank along there. The stakes will hopefully take root and grow into bushes that will stablize the bank, too. Here are a couple of shots of that - 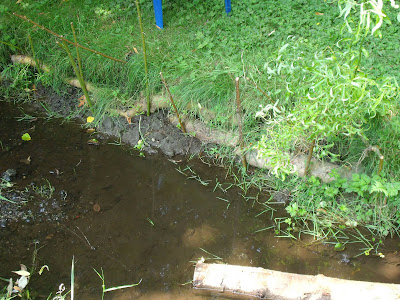 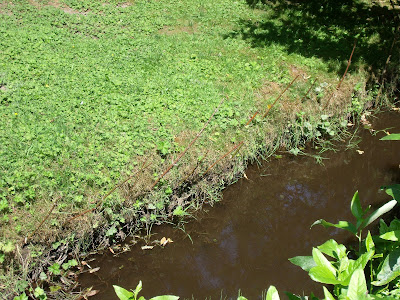 Can you see the stakes in this shot? It's a little hard to see. Hopefully they survive this crazy hot, dry spell and leaf out!
I caught some different steps of the process when the second set of logs were installed:
Drilling... 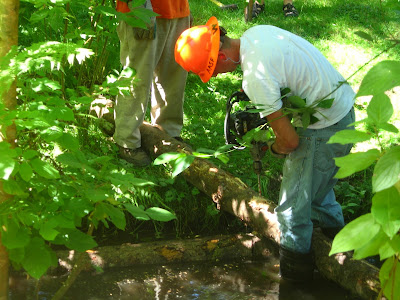 Pounding in rebar with this awesome tool... 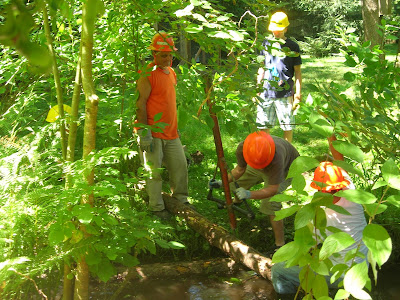 Done, with an extra chunk of willow thrown in for good measure.... 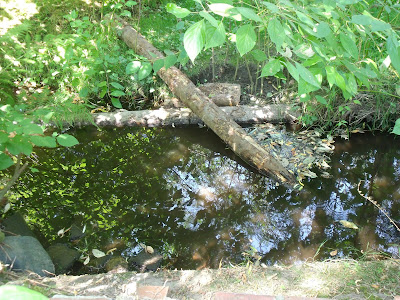 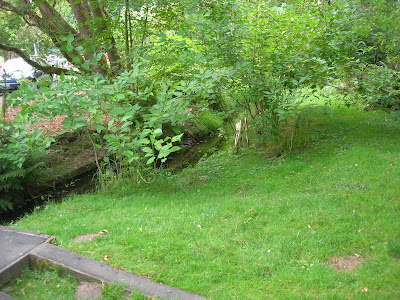 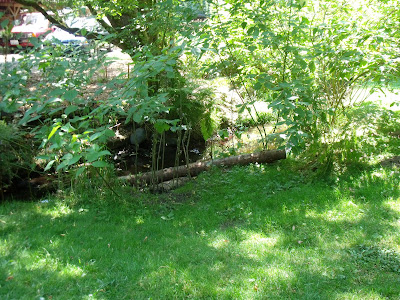 There are a bunch of live stakes poked in there, too. Actually, the redtwig dogwood that are already growing there are from branches that I poked into the ground a few years ago.
Here's the last pair of logs, placed up near the front of our yard close to where the stream comes out of the culvert that goes under the street - 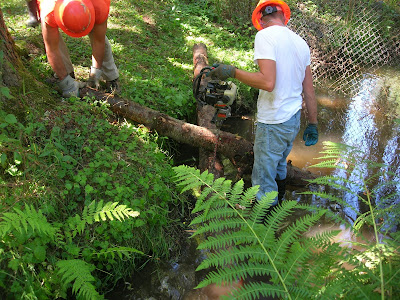 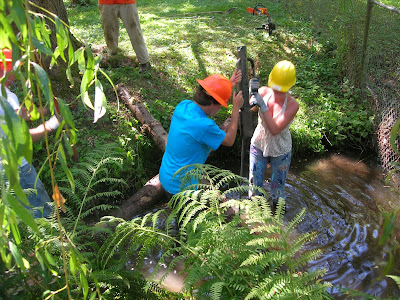 I love this two-person rebar pounding operation!
And here is the final set, all finished - 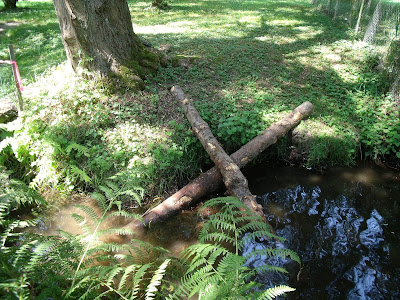 This particular spot gets hammered by the water blasting out of the under-sized culvert in high run-off times. It will be interesting to watch what happens here now.
~~~~~~~~~~~~~~~~~~~~~~~~~~~
There are a few reasons to add large woody debris to a stream. Most obvious to me is the effect this will have on the flow in the stream when the rains return. Instead of just blasting literally straight through this section of the stream, the flow will move up and down and around the logs. Maybe this will slow the flow down a tiny bit. But the most interesting thing that the logs will do that I didn't fully realize is create better gravel beds for spawning. The logs should catch some of the small rocks and pebbles that would otherwise be pushed downstream with some of the massive flows that we see in the fall and winter. Plus the movement of the water going up and over the logs and then down again clears the silt from the streambed immediately downstream from the logs. I hadn't realized that before.
And of course the logs will provide some cover for the creatures that inhabit the stream. And we were so excited to learn about what critters are actually living in our stream! But more about that later....
Posted by Stream keeper at 1:13 PM 1 comment: