The Size of the Swamp Creek Watershed May Surprise You


Thanks to a glorious break in this stretch of otherwise very rainy weather, Eric and I were able to get outside late yesterday afternoon and take a quick stroll through Wallace Swamp Creek park.  You can see here the huge amount of water that we witnessed flowing out of the sediment pond located in the stretch of Swamp Creek that flows through the park.  The water has actually carved a secondary exit through the berm to the left of the area where the water is supposed to flow out of the pond.  Eric commented that we were actually watching the rainwater that fell on Everett and Lynnwood flowing by.  Which reminded me....

A friend of ours lent Eric this clever and information-packed booklet that she had used in her classroom.  It's called "North Creek and Swamp Creek Watershed Guidebook", and it was put out by Snohomish County Public Works some time ago (no date in it anywhere, unfortunately).  It is packed with great watershed guidelines and information, but what I couldn't wait to share is this particular page that shows the huge area that makes up the Swamp Creek watershed.  (Click on the photo to pop out a larger version in a new page)

All of the area in that map drains into Swamp Creek and ends up flowing through Kenmore.

So it should be no surprise that there is flooding in the area around Swamp Creek in Kenmore when we have heavy rainfall.  There is a huge urban area that is ultimately draining into Swamp Creek.  Flooding is a watershed issue, but unfortunately it's the area furthest downstream that experiences the most dramatic cumulative effects of the combined stormwater runoff coming from upstream.  Is it possible to convince (or force) our upstream neighbors to make changes going forward that will lower the amount of runoff that is hammering us down here?  Planning for a future watershed forum is in the works, so hopefully a watershed-wide conversation can at least get started. 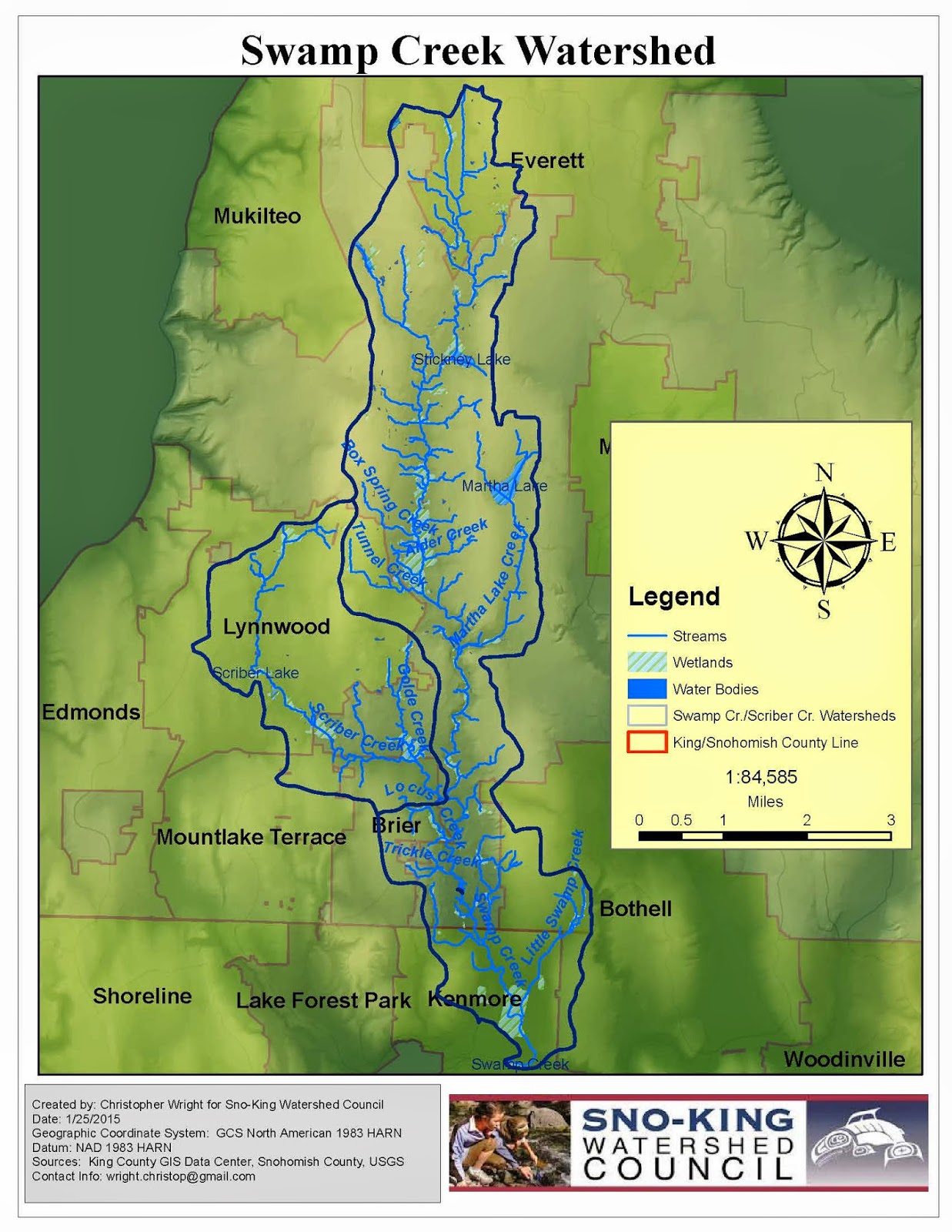 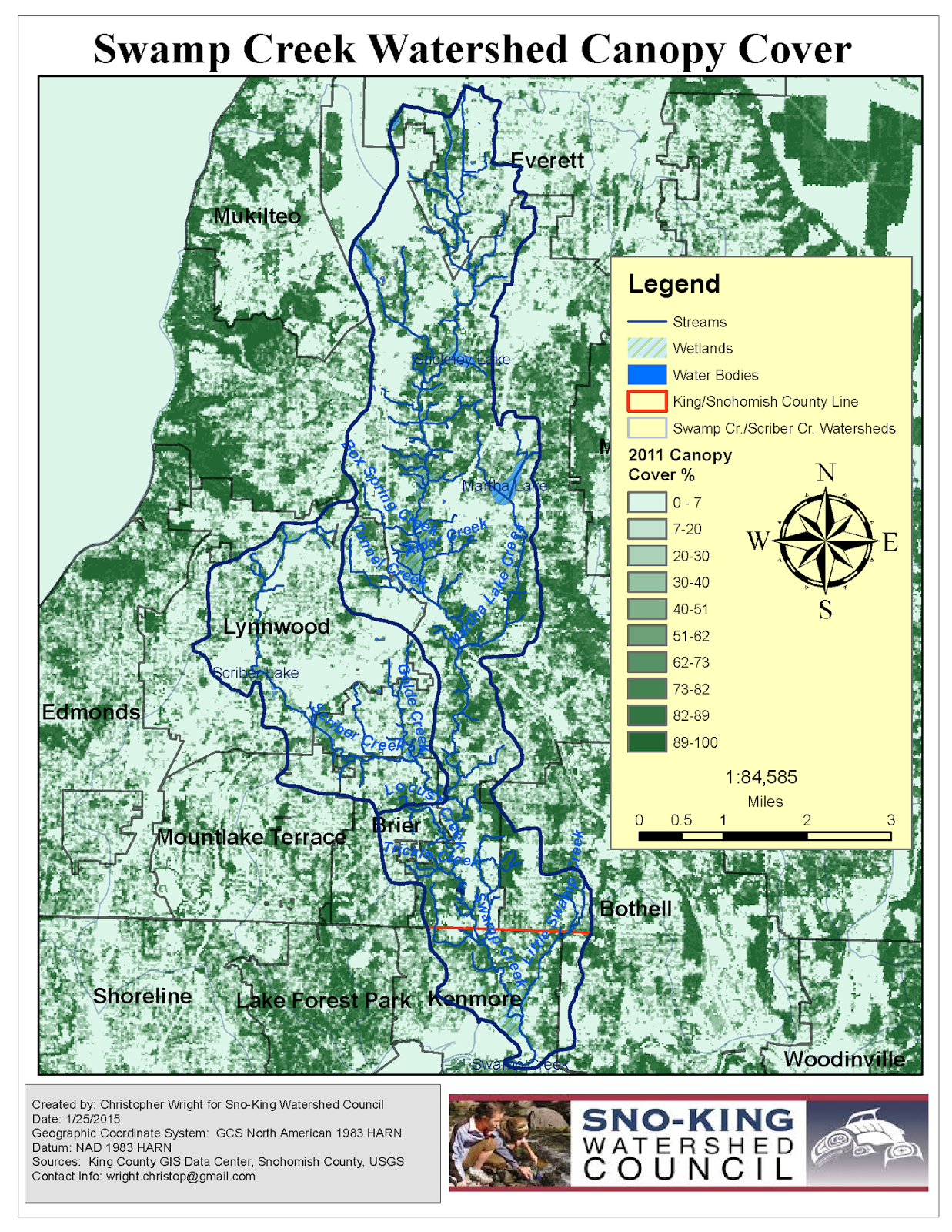 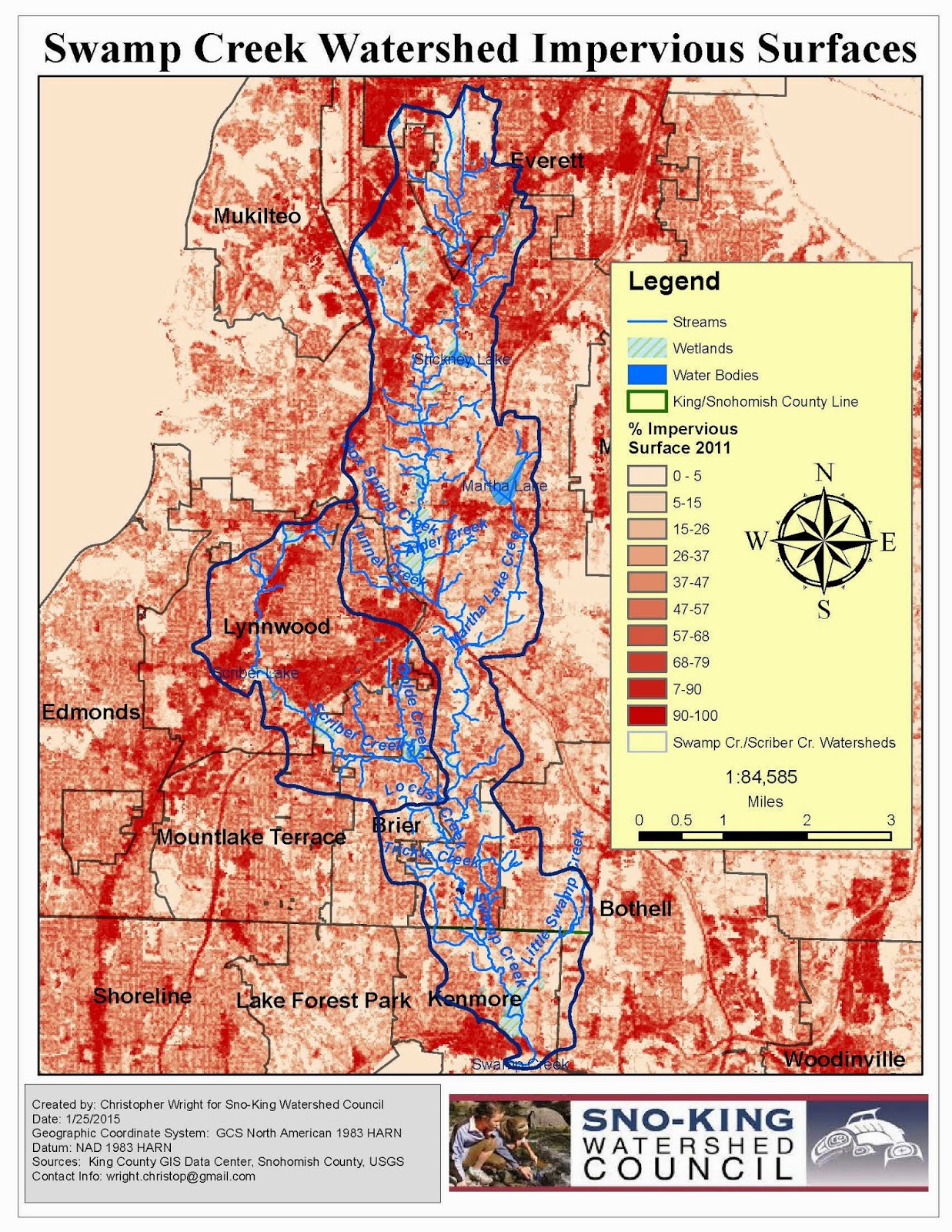 And here is probably the best map of Little Swamp Creek and its watershed that I have seen, showing its headwaters in two different neighborhoods in the Canyon Park area of Bothell -- 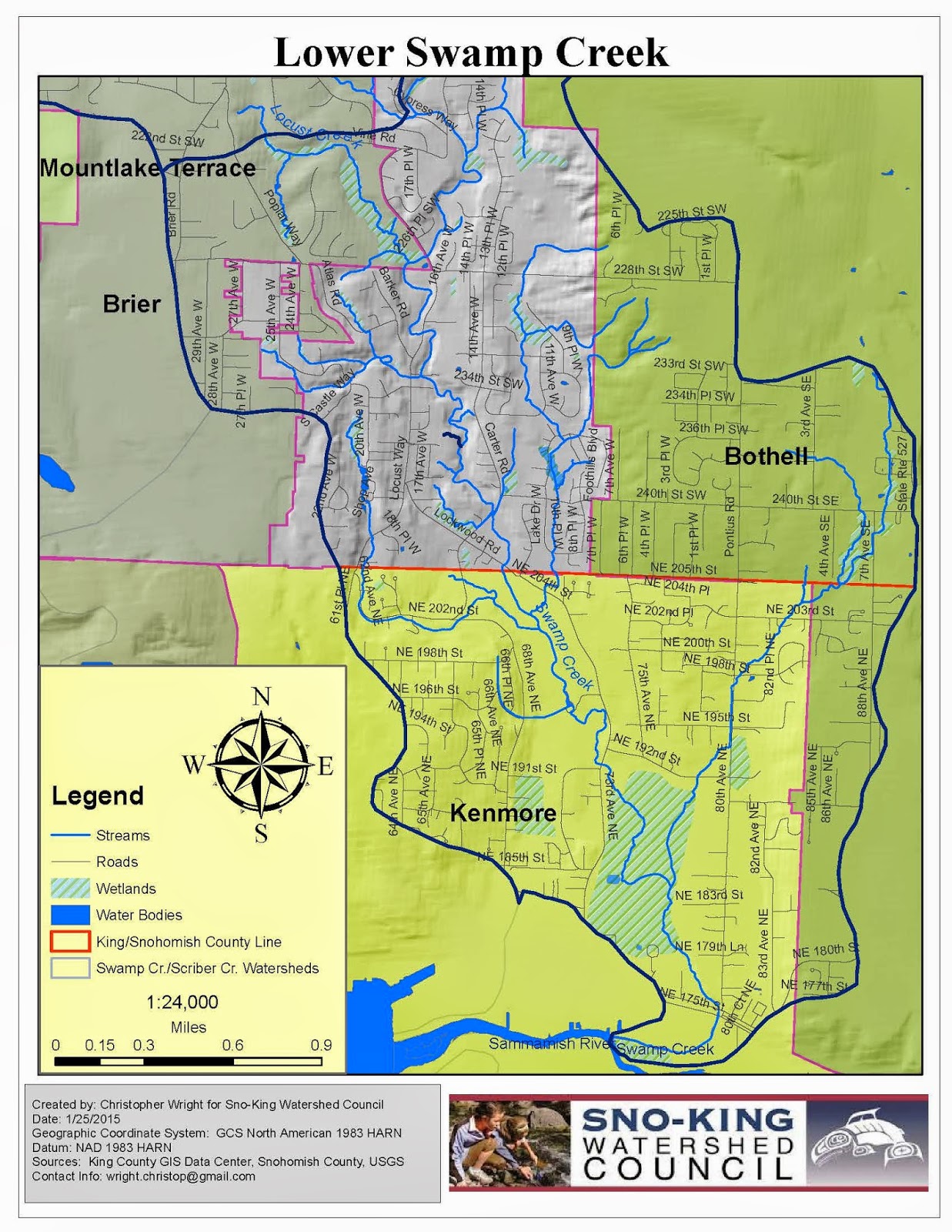 This unusually dry winter has meant that instead of sitting in front of the computer blogging about Little Swamp Creek I've been happily spending that time outside getting rid of blackberry bushes that have been burying some of the plants in the restoration project our neighbor's yard.  More about that project another day.

If you are interested in purchasing native plants for a very good price, you have until February 9th to pre-order plants from the King Conservation District Native Bareroot Plant Sale.  You can purchase everything from Western Red Cedars to coastal strawberries.  You can't purchase just one plant, you have to purchase the bareroot plants or plugs in bundles of 10, and you have to be able to pick up your order at their location in Renton on March 1st.    I am excited to add some native ground covers like the coastal strawberries and low Oregon grape to the edges of the replanted native areas along Little Swamp Creek in our yard.  And in the project behind our fence we will replace shore pines that were smothered by blackberry canes and cedars that were eaten by deer.

I'm hoping that I am successfully embedding below a .pdf file with all of the sale information and the list of available plants presented in a very helpful chart.  If you click on the arrow at the top left corner of the image it will get rid of the small preview views on the left side. 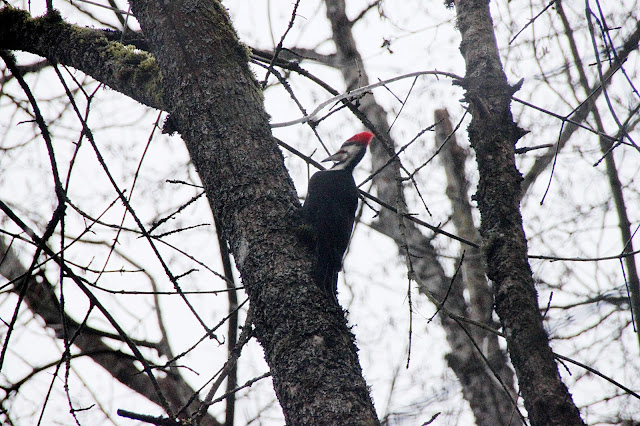 While I was taking pictures of the skunk cabbage at the edge of the wetland one day last week, a pileated woodpecker noticed me and started making a show of hopping up the trunk of a nearby tree. 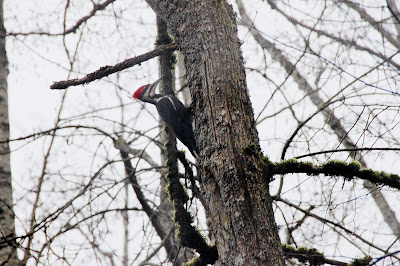 Pretty soon all was quiet when the bird flew from the tree and disappeared.  But I had that eerie feeling that I was being watched,  Sure enough, what I first thought was the pointy stub of a branch on the side of a tree was actually the woodpecker peeking out of a hole.  I couldn't believe how lucky I was to stumble across this surprise - 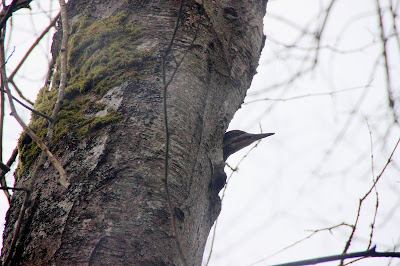 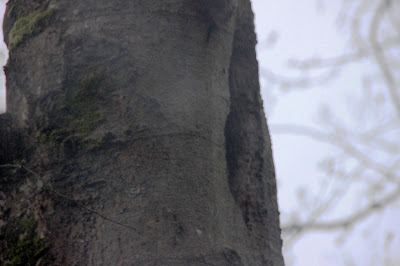 That vertical gash on the right side of the trunk is the entrance to a cavity in the tree.  The combination of the low light of approaching dusk and my feeling that I needed to take a quick picture and back off meant I ended up with a disappointingly blurry shot of the opening.

I beat a hasty retreat because I really didn't want to disturb this bird, especially if it has eggs in that hollow.  As I left, the woodpecker flew out of its hole to keep an eye on me. 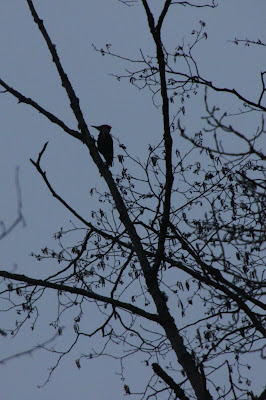 
This species requires late successional stages of forest for habitat, as well as younger forests that have scattered, large, dead trees for food, nesting, and roosting. In younger forests they requires larger areas: 3,904 acres of virgin forest supports 3-6 pairs of Pileated Woodpeckers, while the same area of secondary forest will support just one pair. They also require larger trees with dead centers for roosting, where the bird excavates only the entrance hole.


Can it really be that each pair of woodpeckers requires that much territory?  I saw a similar statement on a website  Pilleated Woodpecker Central  -


Territory size varies between 1000 and 4000 acres.  They will defend their territory year-round.


According to the second website, predators of the Pileated Woodpecker include the Red-tailed Hawk (a pair of which used to annually lay eggs in a large nest located in a neighboring tree), Barred Owls (which we have been hearing at night recently), weasels, and squirrels, among other animals.  These are just the predators mentioned that I know are sharing this same corner of the wetland.

And these woodpeckers are monogamous.  As in they remain with the same mate for life, not just for a mating season.  That is cool.

Right after my chance discovery, our friend Jeff shared some beautiful pictures of a pileated woodpecker that visited his bird feeder located about two miles upstream from us.  Jeff gave me the go-ahead to share his photos here.


Posted by Stream keeper at 7:35 AM No comments:


Has it really been almost a year since posting on here?  Time to get back in the groove.  Suddenly watching the flora and fauna come alive around here has inspired me to get my blogging act together.

Just as a brief reminder - I started this blog in April of 2009 when Adopt A Stream lead a project to restore a native growth buffer along the banks of Little Swamp Creek where it travels through our yard.  Students from the Leaf School at Edmonds Community College helped plant and mulch the buffer here in two phases and helped install large woody debris in a couple places along the stream bank.  This work took place between April 2009 and April 2010. Adopt A Stream and The Leaf School also completed an additional restoration project in our neighbor's yard where the stream continues behind our property.  The plants in our yard are doing fabulously, with only a few becoming victims to varying degrees of deer and beaver.

Back to what is happening now.  Indian plum is one of the first native plants that we see blooming along Little Swamp Creek, but it's not the only native plant currently blooming here.  Skunk Cabbage is also popping up like mad.  I hadn't smelled it yet, but I sure saw a lot of blossoms in the wetland behind our fence.

A few spots of bright pink Salmonberry blossoms suddenly appeared along the stream, 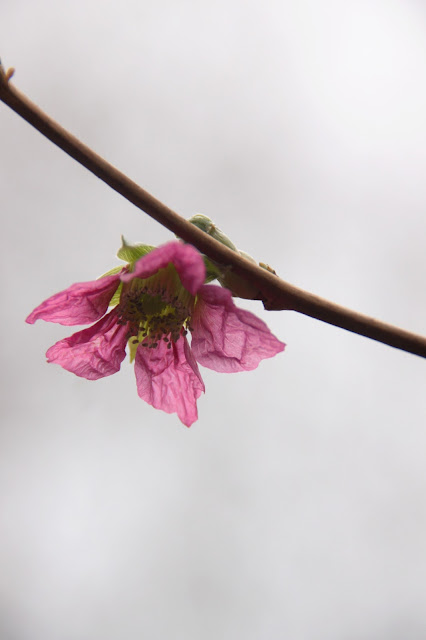 which prompted me to share the signs of spring showing up in the native plantings along our little stretch of Little Swamp Creek. 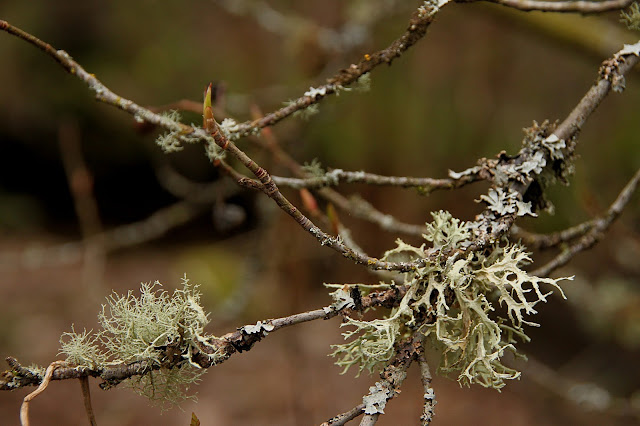 This chokeberry is one of the first plants that we planted next to the stream. That was back in 2000.  It is now sporting a beautiful collection of lichens. 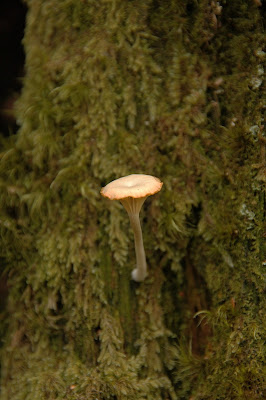 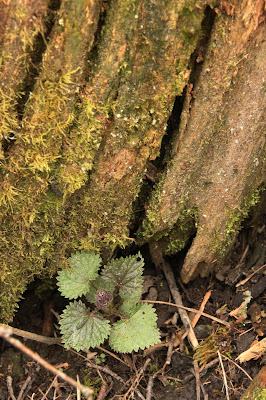 This little nettle start and mushroom were part of the plant community on and around a huge, old tree stump that was left behind after this area was logged years and years ago.  There are several old stumps like this in the woods around us.

I didn't realize how readily the Red-flowering Currants will multiply by establishing a new plant with root growth off of a branch that remains in contact with the ground.  Here's an example in our yard - 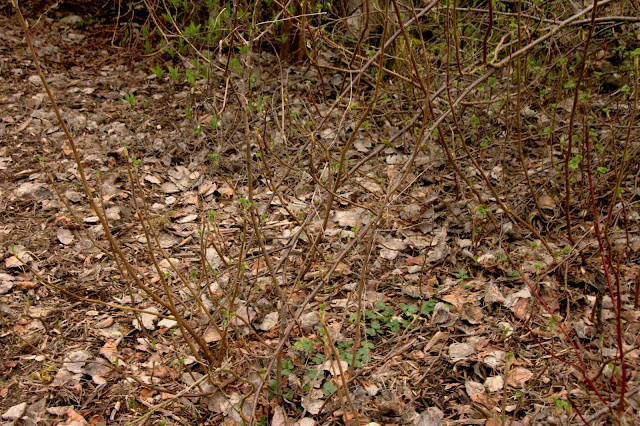 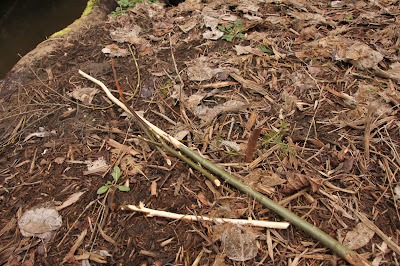 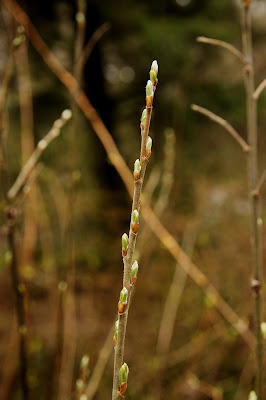 I took a picture of this willow next to the stream on one day, and the next day it was chopped down by a beaver.  More on the beaver issue in a future blog post...


Posted by Stream keeper at 9:46 AM No comments: