Our friends from the Adopt-A-Stream Foundation are back on the banks of Little Swamp Creek, this time preparing to do some stream-side restoration work on the property behind us.  So as they are out there working hard in the rain cutting down blackberries and staging plants, I will, with much guilt, start catching up on the blog that they inspired me to start.

This summer our yard and those of our immediate neighbors were regularly visited, raided, eaten by rabbits and deer.  I have never seen deer or rabbits in our yard like we did this year.  I'm wondering if the rabbit population in particular has risen due to the fact that the coyotes don't seem to be around like they were when we moved in 12 years ago.


You would think from the number of times that the deer were in our yard/garden this spring and summer that I would have more pictures of them.   This one shot is pretty funny -


The deer wiped out our initial crop of raspberries by eating them, cane and all.  And they ate the top half of all of our tomato plants.  They've obviously really enjoyed the red osier dogwood bushes in our yard and behind the fence, which is just fine with me as they hold up well to the nibbling and we have lots of them.  We were seeing up to four deer at a time around here during the summer.  Just a few days ago a solitary deer was nibbling on plants at the side of the road when I drove away.  We knew that at least one was still secretly visiting our yard because it/they leave presents for us in the garden....

This amazing caterpillar showed up on the deck railing one day - 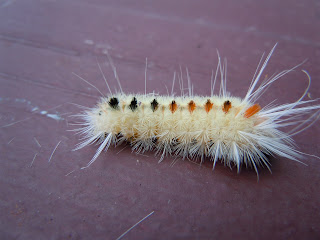 - I'd love to know what it turned into.
We didn't notice any salmon returning to spawn in our stretch of Little Swamp Creek this year, but I would periodically see fish several inches long zooming around in the stream throughout the summer.  There was a fish that seemed to station itself under the bridge all summer long and would swim away when it felt me approaching, so I never captured it on film.  Here's one fish that I did manage to get a shot of -

Oh, and for the record I would like it to be known that I did see salmon returning to Swamp Creek this fall, which I figured would happen on the year that I skipped out on being an official Salmon Watcher.  I spied two sockeye and one coho, all on different days, down where Bothell Way crosses over Swamp Creek at 80th.  I  believe that it has been several years since I saw and recorded any there during my official "Watching".
Birds are the wildlife that we notice more that anything else in our yard.  I've always been amazed by the variety of birds that we are lucky to see.  My favorite are the Swainson's Thrushes that we hear pass through our area every summer, though I can only identify them by their song, not by sight.  We used to see Kenmore's official bird, the Great Blue Heron, in our yard fairly often, but we rarely see them now.

Every year a robin makes a nest on either the wisteria or grape arbors off of our back deck, but this year the nest ended up on a grape arbor that is directly below our window.  We were able to watch as four eggs were laid and four eggs were hatched.  Amazingly enough, they were never discovered by predators.  Here is a shot (taken through the window screen) after the first of the eggs hatched - 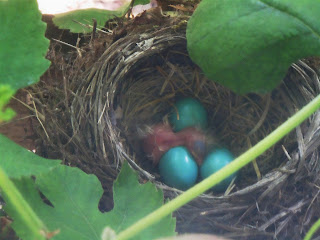 A pair of Stellar's Jays were making a huge a racket on our back deck one day last summer.  I realized why when I saw this cute-but-crabby-looking baby jay under our barbecue -

I've mentioned before that there is a hawk nest in a cottonwood tree in the wetland behind us.  It is incredible to see that nest used year after year, and I would love to know whether the same hawks lay their eggs there each spring or if the next generation comes back to use the nest.  Or if a new pair finds and uses it.  Here's one of the resident hawks watching over the field- 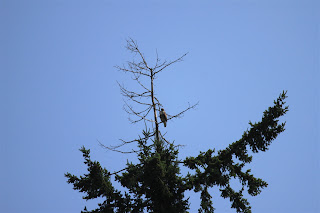 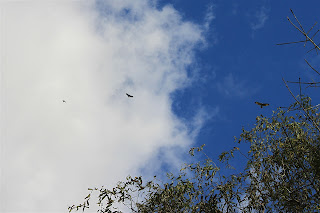 A beautiful pileated woodpecker was on a snag across the street when I left on a walk, camera-less, last week.  You'll have to settle for a picture of some visitors to the cottonwood snag in our backyard last spring - 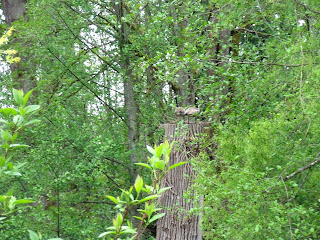 All of my pictures of these two Canada geese that landed on the top of the snag are blurry, and I think it is because I was laughing too hard to hold the camera still.  I seriously wondered if they were going to try to build a nest there, but they didn't.
And finally, evidence of a more troubling visitor to our neighborhood - 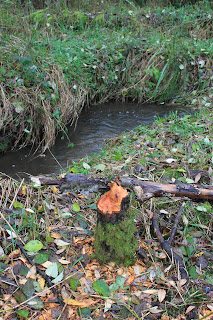 The Adopt-A-Stream guys pointed this out to me behind our fence.  This tree was 6+ inches in diameter where it was "chopped" down, and I couldn't figure out where the rest of it ended up!  I've blogged about the stream-side black pussy willow bush that we lost to beaver/mountain beaver/? a while back, but that trunk was a lot smaller than this.  This is a bit more disconcerting.
Posted by Stream keeper at 4:32 PM