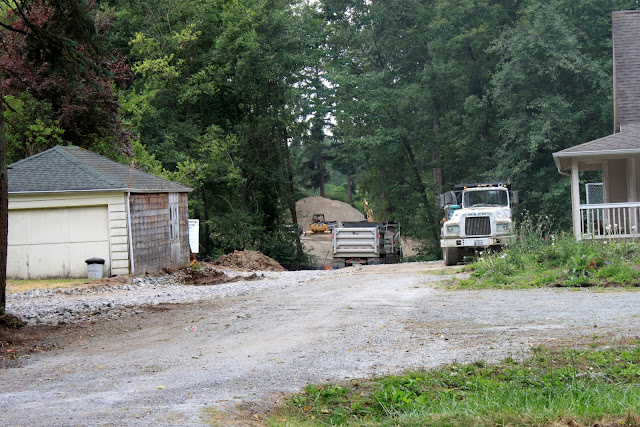 One of the most disappointing sounds to hear as a person who cares about the well being of a stream is the sound of earth-moving equipment working in the vicinity of the stream.  Unfortunately for Little Swamp Creek and for the peace and quiet of our neighborhood, a long-dormant proposed development named West Creek Village on 80th north of 192nd evidently was picked up by someone new and is moving full speed ahead.
At first there wasn't even a Notice of Construction Activity sign on the property.  It's disconcerting what requirements just might not happen until someone points out that they are missing.  THAT is as good a reason as any why people need to speak up.  About anything.  After it was pointed out to the city, the sign showed up right away... 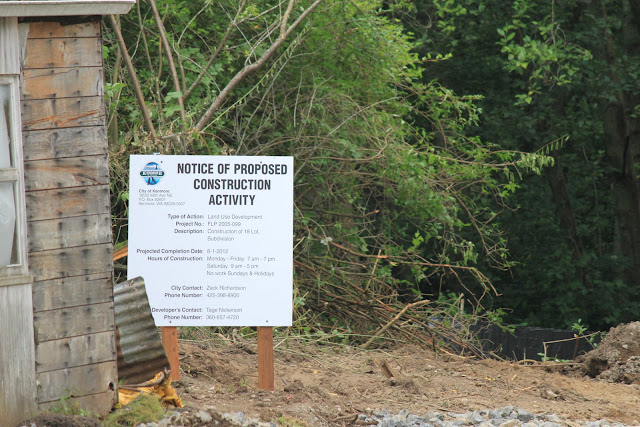 First clue that something was up?  Hundreds of these dump trucks with trailers dumping loads of dirt on the site all day long for days.   By the way, the large trees on either side of this driveway are now gone... 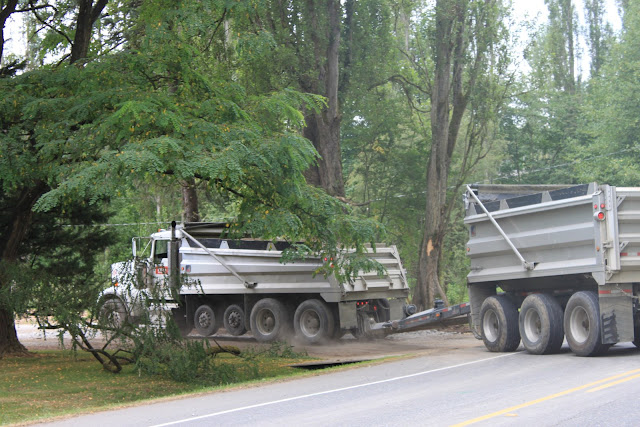 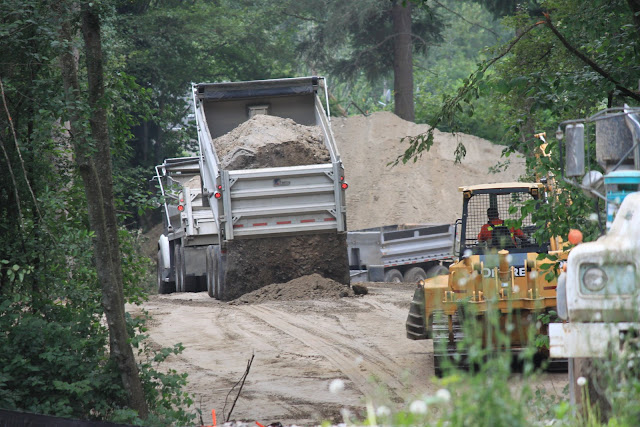 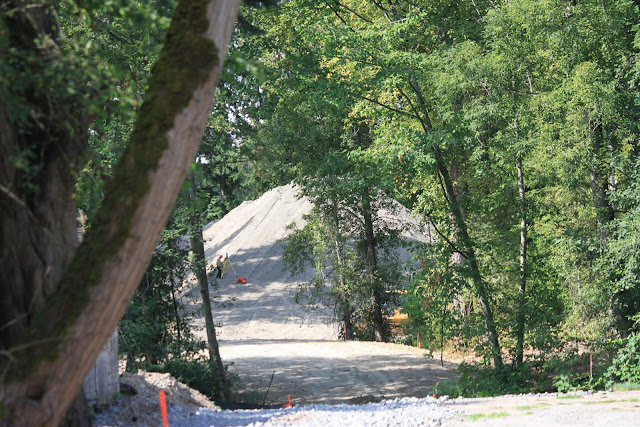 I call the mound of dirt that they brought in "The Kenmore Matterhorn".   I was pretty excited to see a chance for a photo with a person on the pile for scale.  See him?  It's unbelievable that all of that dirt is really going to be used here.

When I went down to the city to see what was going on and point out the lack of an information sign, they were kind enough to give me a map of the project and mark on it where silt fencing should be.  The silt fencing is supposed to keep muddy runoff from flowing right into the stream.  I have to say that so far it seems to be doing an excellent job. 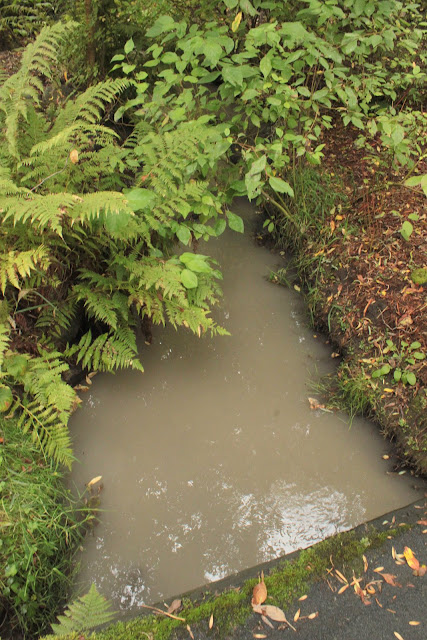 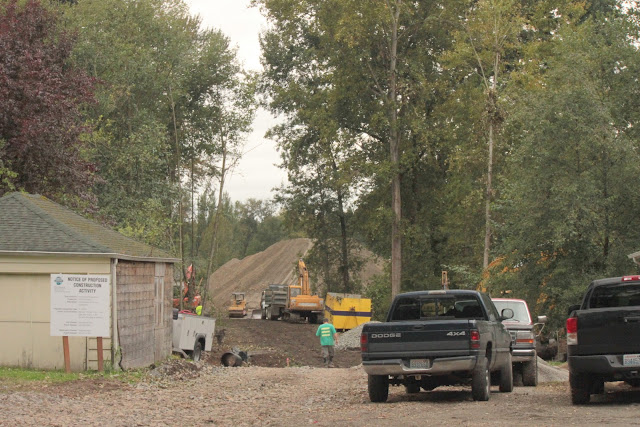 and the stream immediately upstream from this project was sparkly clean - 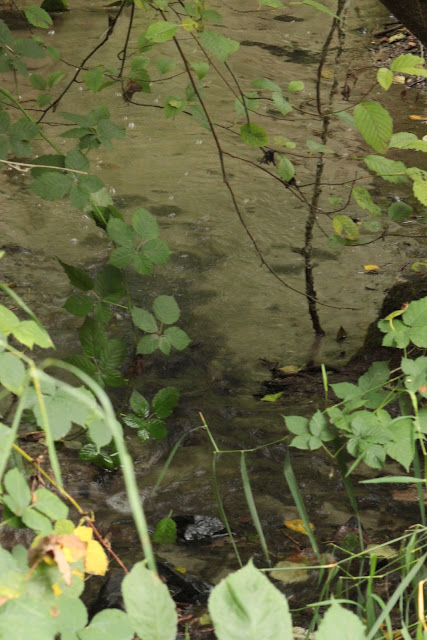 Luckily the city contact person has been excellent in getting right back to us when we have had concerns, and that day he whipped right out to the site to check it out.  Evidently the project required a temporary diversion of the stream to build a new stream-crossing, and it was all done with the proper permits.  I'm not sure why this is OK at the time of year when salmon are returning....seems like it should have been done in the summer.  A few days later the city contacted us to warn us that the project was going to take the stream out of the diversion and that there might be silt in the water again.  We appreciated the warning. 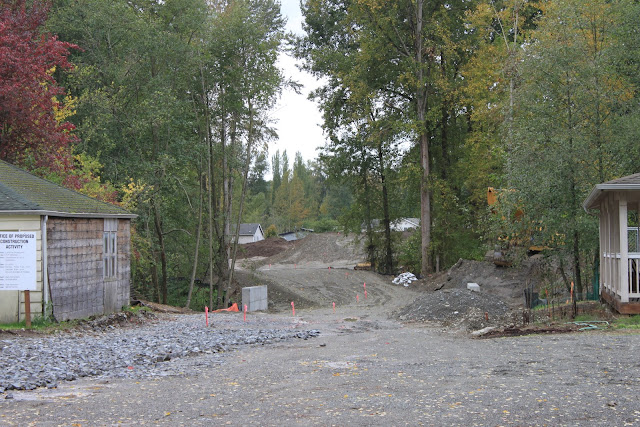 This is a picture taken today.  You'll notice that the massive dirt pile has shrunk.  Some of it must have been used to raise up the grade of the entry road, since that has now less of a dip. The cement walls are evidently where the stream runs under the access road.  Someday I'll walk down there to take pictures of the stream, but surprisingly enough there was someone riding around the property on a golf cart today, so I stuck to the street....

Posted by Stream keeper at 3:55 PM